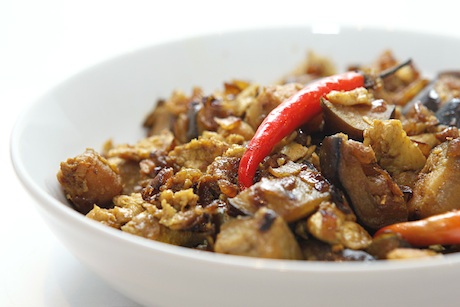 There’s been an interesting development. We bought a house. A whole one. With a staircase and a roof. Excuse me if I sound a little shell-shocked at this outcome. Shoot me, however, if I populate it with more offspring, furry live animals or toys. (Shoes and clothes, on the other hand, are perfectly acceptable).

Now here I was thinking we would never be seduced by a patch of green and a few decent schools. What a change a few years makes.

A new house means a new kitchen everyone. And this alone calls for celebration! Quick Indian Cooking is about to get a new HQ. A space that is actually designed for Indian cooking. Shiny black floor tiles and glossy white units aren’t best matched with turmeric powder and lemon juice after all.

An architect is on the case, under my watchful gaze and a precariously-dangled wooden rolling pin. He has a tough job ahead. The brief: to create the most gorgeous, functional and special space for £2.75. Now there’s a challenge.

In the meantime, I am dreaming dreams about floral aprons, flour-dusted hands and perfectly-stacked rotis with two charming angels playing happily with plastic bricks. In reality, I’ll be in my heritage-look trousers and shoe boots, trying to feed them porridge and make the dash to work while they squeal “my don’t like it, my don’t want it”.

Still, they’ll have plenty of space to grow now. And eventually, they will listen to me and do as I say because I am the mother. Or so I think. On the threshold of our new home, I wanted to dedicate this post to all other deluded mothers and father out there, swapping their old lives for the uncharted.

This recipe for Dim Begun – a lightly spiced egg and aubergine saute – comes from no other than my little sister’s childhood friend and flatmate. It’s her mother’s recipe, which she sent to me in a series of bullet points starting with “ma said” and unsurprisingly ending with “but I didn’t listen to her”.

I loved it, all three times I made it. Even though I never did write the recipe down until the very last attempt. If change tastes this good, I’ll have a second helping, thanks.

Chop the aubergine into small, bite-sized cubes and plunge into ice cold water. They tend to rise to the top, so I stick them in a pot and stick the lid on. This helps them cook later, without just soaking up all the oil in their pores.

In the meantime, chop the onion into small pieces and finely mince/grate the ginger. Next, bring the oil in a large, preferably non-stick pot to heat and when it’s hot, add the sugar. As it caramelises, stir in the onion and ginger and saute until golden.

Then mix in the turmeric and jeera powders, and drain and toss in the aubergine pieces. Stir the whole lot well together, cooking the aubergine. You could lower the heat to a medium and cover the pot, stirring regularly.

In about 10 minutes, the aubergine would have softened but retained it’s shape. Now push the whole lot to one side of the pot. Then crack the two eggs directly into the pot and gently scramble them and mix them into the aubergines.

To serve, stir in salt to your taste and chopped red chillies. This is simply divine rolled inside rotis or served as a side dish to rice and dal.