I am out of steam. Pregnant for the second time, with mini Basu turning into the Tasmanian Devil. Mega intense book launch in India following a short break with the family. And never mind the PR job. But let me put the violin away for a moment. There are lots of positives to report. Miss Masala is now up there with "Hot Desi Masala" in Google searches. Summer has been short but brilliant fun. And I've been cooking loads. Just eating it all too quickly and passing out straight after! This is one of the recipes that proved a hit when a girlfriend came over to discuss urgent love matters. A lightweight, meal-in-one Palak Murgh or chicken curry with spinach. Of course, who thought to take a photograph or, more importantly, make a note of the recipe at the time! So try two, I rustled it up again for a mid-week dinner ticking all above boxes. Except this time I dived in cooking sans shower cap and eating with fingers, forgetting the big client meeting the next day. I swear his nose twitched as I quickly greeted him with an air kiss. The Palak Murgh emanating from my now truly luscious locks came a close second to the aromatic but turmeric-stained fingernails I was sporting. Still, this curry was worth every moment. Here's to more where it came from... PS = You can use diced chicken thighs in this recipe but the end result will not have the same depth. 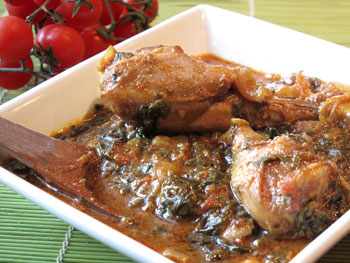 Chop the onions roughly and mince finely the ginger and garlic. In a pan, bring the oil to heat on high and when it starts sizzling when touched with a wooden spoon, add in the bay leaf, cinnamon and sugar.

If the spices start getting stuck to the bottom of the pot, add a little hot water and scrape off.

Now, roughly chop the tomatoes and add them to the pot along with the puree. As the tomatoes disintegrate, throw in the chicken thighs and drumsticks and mix the whole lot into the masala to brown evenly. Then add half a cup of hot water, lower the heat to medium and cook for 20 minutes to half an hour covered, stirring every five minutes, until the chicken is cooked.

You will know because the chicken will separate from the bone on the drumstick, but it’s always worth cutting a piece up to be doubly sure.

When the chicken is done, mix in the cooked spinach, add garam masala and salt to taste and simmer for a final five minutes until oil floats to the surface. Enjoy with rotis someone else prepared or in my case, a big bowl of steaming hot Basmati rice.