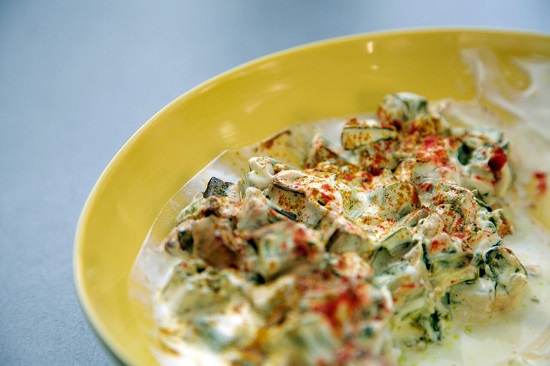 A week is a long time. I was all glow post new book. Until the UK General Election knocked it out of me.

Let me make a brief attempt to summarise the drama that has unfolded. Two main parties, both equally detested. Neither gets a straight majority. The result is Hung Parliament. The third political party, rises to prominence, in the bid to form a government.

Dithering political leaders are next locked in discussions about political and electoral reform at a time when the economy is in the doldrums. People’s lives and livelihoods are at stake. The result: the most unlikely political marriage in the history of the nation.

Let’s hope this one doesn’t end up in the divorce courts.

Of course, I am no expert. But given this was the first General Election that I have ever voted in, it certainly got my blood boiling. I decided to stay cool with a spot of summer cooking. With Bhindi Raita – that’s spiced and chilled savoury yogurt with okra or ladies’ fingers.

Bhindi’s are infamously slimy. The trick to banish slime is to wash them thoroughly in cold water before you slice them. Now, some may recommend lovingly wiping them dry but I just leave them to drip dry in a colander over a clean sink while I get on with the rest of my cooking. Then slice and marvel.

The way to get the bhindi really crispy without using too much oil, I have discovered, is to coat them in a bit of oil and grill them rather than fry. Tossed into ice cold, stirred natural yogurt, these little beauties will delight whatever the week has dished up.

Prepare the okra as above in my introduction. Preheat the grill to a medium setting.When it’s hot, grill the cumin on a baking tray for a few seconds, then crush into a fine powder and keep for later.

In a shallow rectangular dish, stir the yogurt with salt to your taste and leave to chill in the fridge. If using black salt, don’t add salt now.

Next mix the okra pieces with the turmeric and oil in a bowl. Place on a lined baking sheet in a single layer on the baking tray you used for the cumin and grill for 8-10 minutes until sizzling and crispy.

When they are done, mix into the yogurt. Sprinkle the freshly ground cumin powder and chilli powder on top and half a teaspoon of black salt (if you are using it). Serve Bhindi Raita chilled as soon as possible.