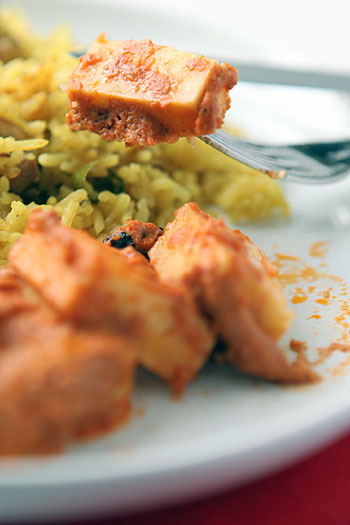 Third time I cooked last week, the curry had a purpose. It was in aid of a much needed makeover. Before you suggest I’m in need of one, it’s for this blog.

Some of you know that I started this blog to prove that if I, with my full on life, general inability to be organised and propensity for destruction in the kitchen, could cook Indian food then so could anybody else.

Four years since, my campaign for curry is gathering pace. In the meantime, a brave new world of digital and social networking has blissfully passed me by.

The man of the moment is my one and only blog guru and free audio kids stories supremo. I told him the site looked dull and dated. He reminded me that I had picked the colours and meddled with his ideas.

So this time we both decided over Kashmiri Paneer Masala, Chicken Pulao and red wine that we should ask you, the esteemed reader, what you think. What makes your blood boil every time you arrive here? What makes your heart soar? Pray, tell, what can I do to make it better for you?

Finely chop the ginger. Puree the almonds with two tablespoons of the yoghurt and then mix into with the tomato puree and paprika.

Cut the paneer into large pieces, like in the picture. Frankly, you can cut it up any way you want. It doesn’t matter. But it does look more special like this.

In a large frying pan or medium kadai, bring the oil to heat on high. When it starts sizzling, add the bay leaf and cardamom. When they start spluttering, add the ginger.

As the ginger turn golden, lower the flame to and stir in the yoghurt mixture. Leave this to simmer for about 2-3 minutes, until the masala takes on a rich orange hue and oil starts oozing to its surface.

Just stir in the paneer at this stage for five minutes. When it softens, serve and eat straightaway. This was especially lovely the next day when the paneer had a chance to lie around in the masala.

Leave a Reply to Jenn AKA The Leftover Queen Cancel reply