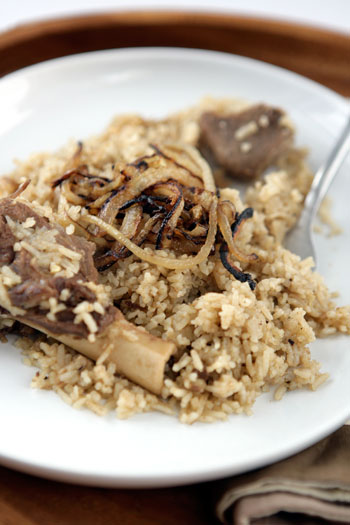 I showed up at the exposed brick, loft-style bar looking like a green goblin in what was once a trendy balloon top. The day had been spent trialling a new chilli chocolate cake recipe. The result didn’t look like it would cause bodily harm.

I am improving every week.

As I handed it over to the manager with instructions about when to bring it out for the birthday girl, she dropped the bombshell. The bar has a cakeage charge of £1.50 per person.

Or I could buy their birthday cake at the bargain basement price of £45 for 6 portions.

I tried every trick imaginable:

And finally, when my long face wouldn’t melt their cold hearts. I pulled the ace card: I spent all day baking that over eight months pregnant.

Shame I have only three weeks more of this fantastic opportunity. Like me, my social life is now slowly grinding to a halt. London Fashion Week – decline. Award-winning theatre – pass. All replaced by cosy nights in with friends and wholesome one-pot meals.

Like this Meat Pulao. The biggest difference between a pulao and biryani is complexity. So I cooked the dish quickly like a pulao but with a number of biryani-style spices for added oomph.  It was just what a friend and I needed with a glass of quality red vino on a Wednesday night.

PS= This took a good 1.5 hours to make. But I ate it for three meals so it was highly time-effective

PPS= You could use a pressure cooker to stew the lamb. One whistle and then 10 minutes. Then lid off to dry up the curry

First cook the lamb. Slice the two onions and puree together the ginger, garlic, cinnamon with a tablespoon of water. Better still you could just use ginger garlic paste and some cinnamon powder to save time.

Fry the onions until pale golden in hot oil over a high flame. Add the ginger garlic paste and fry for another 5 minutes until the masala turns a darker shade of gold. Chope up the chillies and coriander.

Next, go in with all the spices and the lamb. Stir vigorously for five minutes until the meat darkens.Â  Mix in the yogurt, half a cup of hot water and cook covered on a medium flame for 45 minutes stirring regularly until the lamb softens. Then take the lid off and let the curry dry up.

Now get the rice going by washing it thoroughly under cold running water. In a large pot, bring the ghee to heat over a high flame. When it’s hot, chuck in the whole spices and let them sizzle for a few seconds. Then measure the washed rice in a cup, add it to the pot and saute for a minute until it turns bright white.

Then stir in the meat, 1.5 cups of hot water, bring to a boil and then simmer on a low flame for 15 minutes until the rice absorbs all the liquids. That fluffy texture is all important, so don’t stir the rice more than two times when it’s cooking and don’t add water unless your rice remains uncooked.

Serve with the remaining onion sliced and fried on top and a raita on the side.