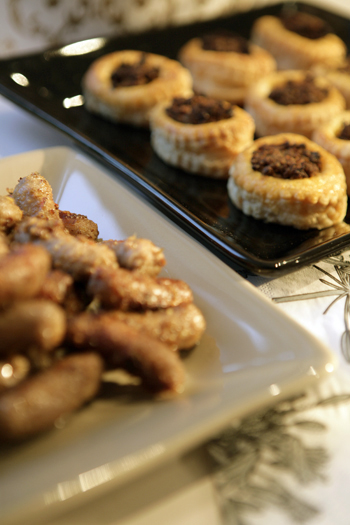 Turns out early January is the best time to throw a party. I sent out 50 invites expecting lame excuses like diets, detox and depression. Instead I got back 45 RSVPs.

I wasn’t quite planning to throw myself the biggest Indian-themed birthday party ever. Am I the only one who gets more excited about growing old, grey and wrinkly with every passing year?

Still, no time to back out now. Hubby and I made an urgent dash to stock up on an evening’s supply of champagne, spirits and vino. We sourced proper glasses from the merchant. And I dispatched him to buy my birthday cake, while I cleaned the new black lacquer cake stand and practiced my coy, surprised look to perfection in front of the mirror.

Food, of course, was on top of mind. I certainly wasn’t going to spend critical beauty-routine time to cook a three-party curry dinner or fashion three different kinds of kebabs. So I improvised on supermarket bought basics to dish up Indian party snacks:

Hubby bought not just one, but two cakes. My Domestic Goddess friend and little sis arrived early to help. I downloaded the best play list since Now 71. And we had the best ever evening in months.

Mark Twain said “Age is an issue of mind over matter. If you don’t mind, it doesn’t matter.” Quite.

Grind all the spices together with the ginger, garlic and vinegar. Taste and add salt to your preference. Smother the cocktail sausages with this marinade and leave to sit for an hour or two.

Line a baking tray with foil and cook a layer of sausages under a medium hot grill for 10 minutes. Then turn over the sausages and cook for another 10 minutes. Discard any excess oil that escapes, saving the marinade, and spoon into microwaveable bowls or plates. When you’re ready to serve them out, reheat in the microwave for three minutes and bring out the tomato ketchup!

Bring the oil to heat over a high flame in a large pot. When it’s hot, fry the onion, ginger and garlic until golden brown. Then stir in the spice powders and fry for another five minutes until you can see oil appearing on the sides of the paste.

If the masala sticks to the bottom of the pot, just add a little hot water and scrape off. Now add the tomatoe puree and the yogurt and fry for another five minutes stirring viciously until it’s all well mixed. Next, add in the mincemeat and jab it with the spoon to brown it with the masalas.

Add half a cup of water and simmer for 20 minutes until the meat is cooked through. Finaly, stir in salt and the coriander leaves.

Before your guests arive, brush the vol au vent cases lightly with beaten egg. If using sheets of pastry, cut each one in 8 even rectangles and brush as above. Then cook for 15-20 minutes in a hot oven until puffed up and golden brown. Fill each pastry case with a tablespoon of keema, arrange on platters and wait until your guests arrive to impress.