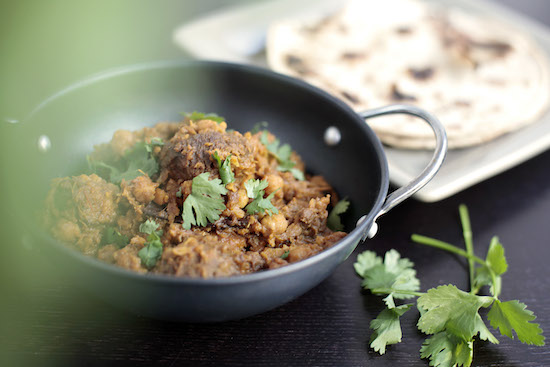 I cleverly used the 15-minute relaxation session at yoga to have a power snooze. Then changed into a pale gold top and dashed to the first Christmas party of the season. Sailing proudly past the other 10 awestruck dumbfounded pregnant women.

Then came the office Christmas party. Where I tried to blend into a room full of gorgeous, small-waisted colleagues. Three layers of makeup and an off-the-shoulder maternity party frock later my boss declared I had “just” maintained the glamour stakes.

But the biggest highlight of it all was meeting at least four different couples who wanted to cook a curry at Christmas. Not in place of the big bronze bird with all the trimmings.Â  But for pre-and post-dinners with friends and family.

I could barely conceal my excitement as I tried to rack my brains for simple curry recipes that wouldn’t send them into a blind ingredient-sourcing panic in the run up to the big event. I needed a chicken, lamb and vegetarian option. Crowd pleasing, one-pot meals that can be cooked easily and in large quantities to feed hungry families.

My next few posts are dedicated to this theme. The first recipe is for Dal Gosht, spiced lamb cooked with lentils. An Indian Cassoulet of sorts. I last made this in a large stock pot, divided it in half and froze it. Later serving it to two small groups of dinner party guests.

Both were well impressed. It’s tasty without being mouth-numbingly hot and a real winter warmer. From one big bronze bird to another – this is my spice-filled contribution to your Christmas meal.

Wash the dal in a sieve under the tap until the cold water runs clear. In a large pot, set it to boil with half a teaspoon of turmeric powder.

In the meantime, slice the tomatoes and the onion and puree or chop the ginger and garlic finely. Bring the oil to heat over a high flame in a medium pot. When it’s hot, throw in the whole spices and as they sizzle up, mix in the onions, ginger and garlic.

Fry the ingredients until they take on a pale golden colour. Now mix in the tomatoes with the spice powders and stir viciously for five minutes until the masalas are cooked. If they start sticking to the bottom of the pot just add a little hot water and scrape them off.

Finally, uncover the lamb and mix it into the lentils. Cook the two together until the lamb is tender and the channa dal just melts in the mouth. This dish is lovely sprinkled with fresh coriander and served with Jeera Pulao. But if you fancy making an extra effort, I would recommend some home made naan to go with it.

8 responses to “One Pot Dal Gosht”