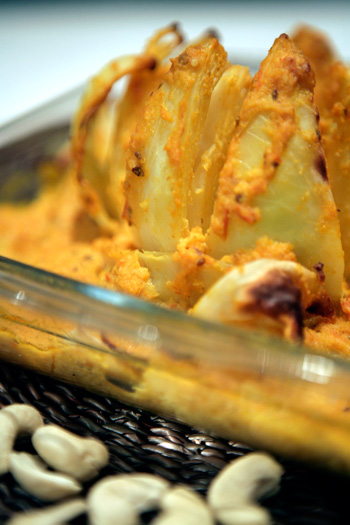 The festive season has started with a bang. Not one to do things by halves, I went to two parties on Saturday night.

The first was a spookily quiet house party. The second, an Irish birthday bash at a new Covent Garden cocktail lounge.

I thawed in the living room at the first stop. Teeth chattering from the big Arctic freeze outside. And then I got involved in a slagging match over a male friend’s hideously-inappropriate party attire of ski boots.

He defended his patch: They’re manly.

I couldn’t believe my ears. Try stepping out in freezing weather in a lace off-the-shoulder dress in the style of Victoria Beckham, silver kitten heels and no socks. Now that’s balls!

And off I went to the madness of central London. This time in a cab to protect the block of ice that once served me well as toes.

To celebrate the start of the jolly season, I cooked a lavish vegetarian main dish that knocks the socks off a plain ingredient. This is Bandh Gobhi Massallam, a sublime, whole roasted cabbage smothered in a nutty curry and baked until tender.

Slice the cabbage into 6 parts without cutting all the way through, i.e. leaving the base intact. Remove the hard outer layer that falls off. Place the cabbage with half a cup of boiling water in a small, deep pot, cover and cook on a medium high flame for 10 minutes until almost cooked.

In the meantime, fire up the oven to a high heat (210 degrees centigrade, 190 for fan assisted machines). Chop the onion and tomato. In another small pot heat the oil over a high flame. When it’s hot, add the cashewnuts, cumin, coriander, cinnamon and cardamom.

Now, remove the whole cinnamon and cardamom into a shallow baking dish big enough to hold the cabbage. Add a cup of water into the remaining masala mixture and go into it with a hand blender and puree it. You don’t have to do this, but the results are seriously impressive if you do.

Finally, place the cabbage gently into the shallow baking dish adding in any bits that have fallen loose. Pour the mixture all over it and bake uncovered for 20 minutes, stirring once in between cooking.

Serve this with some home made naan and raita for full impact.