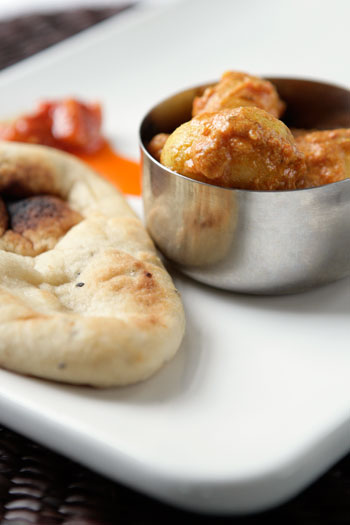 Once a year I grudgingly give up a Saturday evening, dress up in full traditional garb and drive out to the middle of nowhere for a charity Indian dinner and dance.

All for the benefit of a new hospital in Kolkata. The toothy grin on my ageing former local guardian. And a lavish Indian dinner.

I extracted five metres of thick, South Indian silk from the top wardrobe shelf. Self mutilated myself forcing lurid burnt gold bangles down my wrist. All while remaining outwardly chirpy to egg on the miserable suit-fearing man.

We got there just about on time. As I shuffled through the lobby like a subcontinental geisha, a little girl squealed: “Look daddy, a princess.” And everyone turned to look at me.

This freak theme is a recurring one lately.

I quickly posed for a photograph with her and started moving towards the reception. The Indian canapes were running out with every wasted second. I came across a platter of spring rolls. Then salmon blinis. And then the bombshell.

Tonight, people, we are having a three-course traditional British dinner. I choked on my mini fishcake as uncle delivered the blow. I’d greeted half the aunties. I couldn’t run away now.

I pulled the pregnancy card after dessert and made for the exit. The next day, I feasted on Diwali leftover Dahi Aloo Sabzi, a finger licking good potato curry, with supermarket mini naan and some delicious Khanum lime pickle from the box of treats they sent me.

Hardly any effort but worth every minute this time.

PS = I used new potatoes to save peeling time. But by all means use cubed white potatoes…

Take the yogurt out of the fridge and leave to rest at room temperature. Put the potatoes in a microwaveable dish with half a cup of water, cover and cook for five minutes until soft. I did this in the microwave to save time and preserve the vitamins but you can also boil them on the hob. In the meantime, chop up the tomatoes into little bits.

Leave the potatoes to sit in their water and bring the oil to heat in a frying pan over a high heat. When the oil is hot, add in the asafoetida and cumin. As they sizzle up, stir in the ginger and a few seconds later mix in the tomatoes and turmeric, chilli and coriander.

Stir for five minutes until the tomatoes are completely disintegrated and then chuck in the potatoes and their water. Lower the flame to a gentle simmer and as the potatoes soak up the lovely flavours, beat the yogurt well.

Now take the pan off the flame and stir in the whisked yogurt. Stick the pan back on the flame and simmer for five minutes until the masalas are well mixed thrugh. Stir in the salt and garam masala and serve two days later, with buttered ready naan.