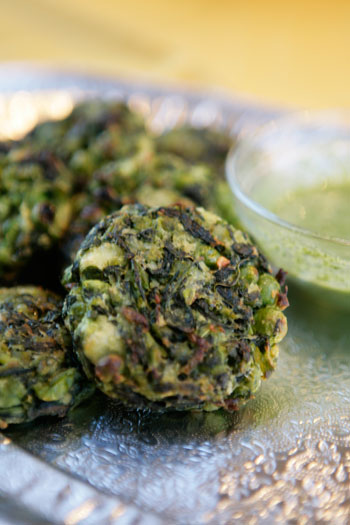 While still in Cambridge, we packed a large number of canvas bags with food and alcohol and made our way to an open air theatre.

We tucked into smoked salmon sandwiches, pasta salad, little cakes and my Hariyali Tikkis – pea, spinach and potato croquettes. And then the play began.

The actors ranted and raved on stage, delivering dialogues like a off-target arrows. A bizarre, masked fairy dance broke up the delirium. A surreal pantomime and tango performance weaved their way into the improvised script. Sending the audience into peals of laughter.

This was Midsummer Night’s Dream?

Funnily enough, I’d lost my sense of humour. It was freezing cold. I was in the middle of nowhere. Dressed ridiculously in my Dorothy-esque red kitten heels and borrowed fleece. Watching a bunch of monkeys butchering Shakespeare. While cows mooed in the fields beyond.

The final straw was when the actors requested picnic leftovers at the end of the performance. The cheek! While Shakespeare was turning in his grave! I grabbed the six leftover Hariyali Tikkis and ran to the car before anyone could say “wherefore art thou”.

Inspired by this recipe, the Tikkis tasted much better than they looked, were super healthy and not too painstaking to make for 17 people. I used frozen spinach and peas but you could just as well use the fresher variety.

They were the true stars of the evening, if you ask me.

Cook the peas and spinach according to pack instructions or simmer in boiled water for 5 minutes each until soft. Peal, quarter and boil the potatoes until they fall apart when prodded with a fork.

Drain the spinach of water by squeezing it well in your hands. Then put all the vegetables in a large mixing bowl and leave to cool.

Next peel the ginger and mince with the green finger chillies. Chop up the coriander and add all three ingredients to the mixing bowl with the cornflour, and salt to your taste. Mash the whole lot together with your hands. Check for salt and add more if needed.

Stick this mixture in your fridge to cool and dry out until you’re ready to cook the Tikkis. When you are, preheat the grill to a high heat (200C) and line a baking sheet with kitchen foil. Take one tablespoon of oil and spread it evenly on the base of the tray.

Then make even-sized balls with the mixture, flatten them to shape 1.5 inch discs and place them on the tray leaving a small gap between each. Cook for 12 minutes on each side until the Tikkis are pale brown on both sides.

You need to be careful when flipping them over as they’ll be soft to the touch and hot. If they fall apart, just shape them again in the tray. Needless to say, you could just shallow fry them but this will take longer and use more oil.

Repeat with another batch until all the mixture is used up. As you leave them on a platter to cool, they will harden and hold together better.

I served these cold with Dhaniya Pudina chutney and they were a huge hit.