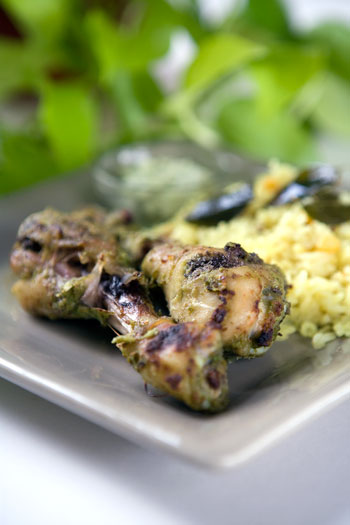 Just as I was leaving home for yoga, my neighbour invited me to join her BBQ in our communal garden.

Normally, I am the focused, sensible sort. But given a choice between dangling my legs mid air and watching succulent cuts of meat cook outdoors, I knew which way to go.

I fretted all the way to the yoga class. Sulked as the instructor didn’t show on time. Then 20 minutes of waiting, I hurried home via the supermarket praising divine intervention.

In an ideal world I would get more notice for a BBQ. But this is Britain. We don’t notice we’ve had summer until it’s long gone.

I slashed a few chicken drumsticks and smothered them with a roasted cumin marinade. Made a rice pulao to accompany it. Shoved the whole lot with a jar of mango pickle into a large Selfridge’s bag and dashed downstairs before the flames went out.

The mini meal was a big success. I’m waiting for my next invitation. Hopefully, before summer runs out.

PS= They ate the whole lot before I could photograph the food. I had to cook it again and grill the lot. Your BBQ version will be a lot darker (from the charcoal) and drier (ditto). But it will taste delicious anyway.

Turn the grill on to a high flame (210 Degree C). Skin the drumsticks, make two deep sideways gashes on each of them and place in a mixing bowl.

Now place the whole cumin on a baking tray and dry grill for about 20 seconds until you can smell them. Remove and place in a food processor along with the peeled onion, ginger, garlic and all the other ingredients. Puree until smooth and add salt to make it a really strong marinade.

Add the marinade to the mixing bowl and leave to rest. Grill or BBQ turning at least two times until the meat has lifted away from the bone.

My top tip is to fry up any leftover marinade with a tablespoon of oil to turn it into a chutney for the kebabs. Mix with a bit of yogurt to get the dipping consistency of your choice.

Soak the channa lentils in cold water. Wash the rice thoroughly under the tap until the water runs clean.

In a medium pot, bring the oil to heat over a high flame. When it is hot, add the asafoetida, cumin and mustard seeds. Give them a stir and throw in the curry leaves. As this lots sizzle up and releases its heady aromas, stir in the channa dal and the turmeric.

Stir the channa dal for a few seconds until it contracts. Next mix in the washed rice and stir for about a minute. The rice will turn bright and opaque. When it does, add a pint of boiling water and stir once.

Bring it back to the boil and then lower the flame to a gentle simmer, cover and cook until all the water is absorbed. This takes about 20 minutes.

This rice is delicious hot or cold. We ate it with the chicken kebabs and mango pickle.