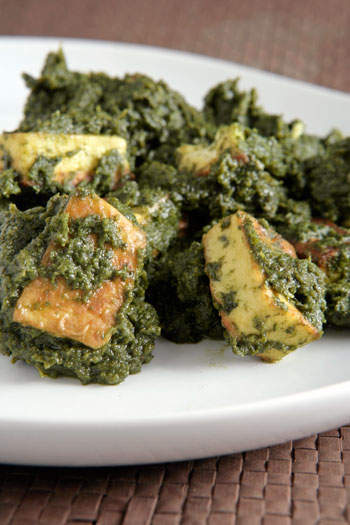 I rushed home with the ruby red gladioli for my mini dinner party.

The food was ready. I needed to grill aubergines for the raita. Ditch the dress and heels in favour of denim and flip flops. Then welcome my guests smile on face, vintage Bollinger in hand.

Of course, nothing is ever as simple.

I drained and shoved the sliced aubergines into the grill. The lamb curry was still partly frozen. Nowhere near ready to be reheated. Then my guests arrived. On time.

A few minutes of chit chat later, I led them into the kitchen.

By this time the aubergines were on fire. Dark clouds of black smoke had filled the kitchen. My guests sat amidst it all trying not to look alarmed, while I waved the tea towel in the air in a lame attempt to improve air circulation.

Some clever lady said “perfection is a road, not a destination”. How true.

And equally applicable to the Saag Paneer or Palak Paneer I cooked for them.

Not entirely satisfied with the recipe I posted on this site yonks ago, I tried my hand at it again. And if the guests were to be believed, this was the perfect saag paneer recipe. Simpler than the other recipe too.

Chop the block of paneer into even bite sized pieces. In a bowl, mix the paneer pieces with the turmeric, chilli powder and a teaspoon of salt and set aside.

Now, chop the onion roughly and mince or puree the ginger and garlic together. In a non-stick pot, bring the oil to heat over a high flame.

When it is hot, add in the paneer and fry on one side until golden brown and then flip over and repeat on the opposite side. Then remove it with a slotted spoon back into its bowl.

In the same oil, fry the onions, ginger and garlic next. When it starts going translucent, mix in the cumin and the chopped green chilli. Fry for about five minutes until the mixture turns a deep golden brown.

Now mix in the frozen spinach and let it cook for another five minutes. When it is thoroughly defrosted in the pot and mixed evenly with the masala, add half a cup of hot water and go in with a hand blender to liquidise the whole lot into a smooth, creamy mixture.

If you don’t have a hand blender, you could tip the spinach into a normal blender for the same result. When it is smooth and back in the pot, add in the fried paneer pieces and the garam masala. Lower the heat and simmer for 10 minutes until the water dries up and the spices have penetrated the spinach thoroughly.

At this point, check for salt. You’ll need to add a fair bit to lift the spinach. But this dish is worth it. Eat it piping hot as a side dish or with some ready nan as a complete meal.