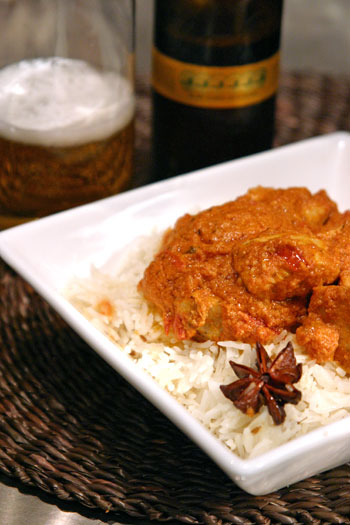 I need a pretty damn good reason to put 500 gm of full fat butter in anything. I got two.

England made it to the rugby World Cup finals. And the British chicken tikka masala celebrated 60 years since inception.

Plans for the evening were being hatched by hubby and his brothers. So 25 emails later, they were as clear as mud.

Sis-in-law sensibly kept mum. But I stepped in once offering to cook curry for the big night. Which then led to another flurry of emails:

Hubby: “Mallika has offered to cook a curry. Don’t know if it’ll be good, but it’ll be edible.”

Brother 1: “I’d rather go for a vindaloo down the road instead…”

Ignoring it all, I took to Butter Chicken or Murgh Makhani. The mother of all chicken tikka masalas.

As I guzzled vino and vodkas, the bunch of adults raced in and out of the kitchen for fourth helpings.

Quite rightly. It was sinfully delicious and effortlessly simple to make. A third pretty damn good reason.

Preheat the oven to a high heat (200 degrees centigrade). Start cutting the chicken into large bite-sized chunks and piling them up in a mixing bowl.

Place the whole spices on a baking sheet and dry roast them for about 10 minutes until you can smell them strongly in the kitchen.

In a blender, whizz together the roasted spices with the ginger and garlic. Add a little bit of water to get a smooth paste. I would ask you to powder the spices et al but it’s too tiresome.

Don’t worry if the paste is a little grainy. Add it along with salt, lemon juice and the 250 gm of yogurt to the chicken and mix the whole lot together well.

Leave this to rest for at least two hours. I left it for three. When you are ready to eat, preheat the oven to 190 degrees centigrade or gas mark 5.

Spoon the pieces of chicken into two shallow baking sheets and bake for twenty minutes until they are white all the way through. Soak the kasoori methi in two tablespoons of hot water.

In the meantime, bring the passata to heat in a large pot over a medium heat. Mix in the remaining yogurt, sour cream and butter.

When you can see the melted butter on the surface of the curry, mix in the cooked chicken with all its juices.

Finally, stir in the kasoori methi and its hot water. Serve immediately with jeera pulao and Cobra beer for ultimate satisfaction.

PPS = Murgh makhani has featured a lot on blogs recently. Try this version too.