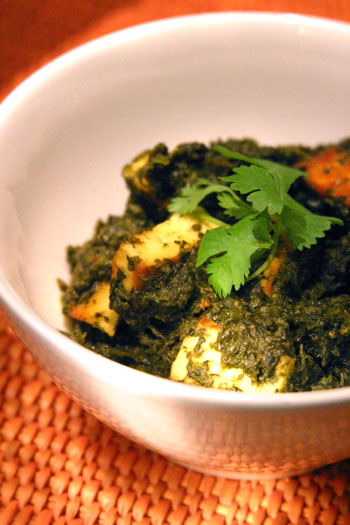 The weather is turning. And that can mean only one thing. A whole new wardrobe.

My stomach churned merely at the thought. Hordes of hormonal girls wrestling over last-remaining size small jackets and long queues to reach even the clothes display.

I could think of 100 better things to do on a Sunday afternoon. Like eating my shoes or toenails.

It started the day hubby pointed out that grey suits and shoulder pads had gone out of fashion since the end of Dynasty. Shit. I hadn’t even noticed. But then, I’d barely ventured beyond the Austin Reed basement.

I should have stayed put. The whole thing was about as much fun as being dragged through a hedge, backwards. Virtually everything I bought needs to be returned. My feed still hurt from the walking. The less said about my bank balance the better.

The only saving grace was the saag paneer I’d made earlier – a thick, smooth and spicy spinach puree with little cubes of Indian cheese. I had a whole pan full of this loveliness to come back to as darkness and exhaustion set. And it certainly buoyed me along.

Give me the healing power of saag paneer, a spoonful of plain yogurt and ready made parathas any day. Shame it couldn’t repair the damage to my wallet…

PS = Check out this even simpler recipe if you’re seriously exhausted!

Juice of half a lemon

Cut the paneer into even, two-centimetre by one-centimetre cubes. Marinate them in the turmeric powder, half the chilli powder and half a teaspoon of salt.

In the meantime, microwave cook the frozen spinach for five minutes until thoroughly defrosted. Add in the green chillies and puree it to a smooth paste with a hand blender.

Now heat the oil in a thick bottomed frying pan over a high flame. When it is hot, fry the paneer pieces until pale brown on two opposite sides. Remove from the oil, draining them carefully.

Now add the onion, garlic and ginger into the same oil and fry until they are a pale toffee brown.

Then add all the spice powders, apart from the garam masala. Stir vigorously for about 10 minutes on a high heat until the pungent, individual smell of the masalas changes to a more blended aroma.

Now mix in the pureed spinach evenly, adding salt to taste. Lower the flame to a gentle simmer and let the spices work their magic through the spinach for five minutes.

Finally stir in the garam masala, the paneer cubes and the lemon juice. Let the ingredients simmer together for another five minutes and serve hot. As a final tip, this tastes much better if it’s left sitting in the fridge for a couple of hours before being reheated.