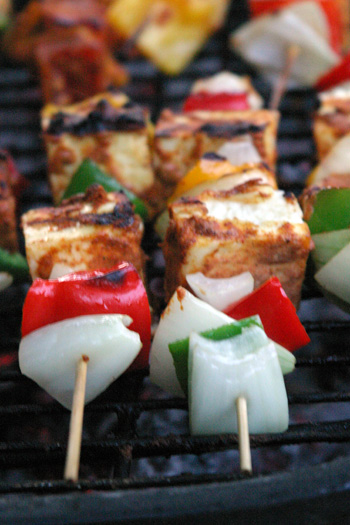 Warm and sheltered from the rainy British weather in a beautiful Malaysian restaurant, we joined our Bengali friend and her mates for a big 3-0 birthday dinner last night.

Just as I was getting in touch with my inner Zen zone after the glorious starter, the waiter handed me the beautifully-presented menu, asking: “Would you like some inter-course?”

I hastily turned down the strange request only to realise he was refering to the option of a mini nibble between the starter and main course.

As I tucked into my spicy marinated quail and coconut rice, I thought fondly about the sunny weekend in Cambridge and the other Indian BBQ dish I made.

It was a tandoori paneer shashlik – chunks of Indian cheese marinated in a tandoori masala and threaded onto skewers with peppers and onions. Paneer can at best be described as solid buffalo mozzarella when hot and polystyrene when cold (Not that I eat polystyrene regularly or anything). It is widely available from Indian shops and I have even bought it at the local supermarket recently.

The paneer gets marinated here in tandoori masala. This is just about the only pre-mixed spice powder I use, because a) it’s a drag to make it from scratch and b) it won’t stink your house up because you tend to cook it outside.

A popular vegetarian tandoori dish at home, this was real hit with the British and Peruvian members of our family. Try this dish with some naan for a really lovely summer lunch.

This recipe serves 10 if alongside other BBQ dishes, 5 on its own:

Chop the paneer into bite-sized cubes, about one square inch each and puree the ginger and garlic.

In a medium-sized bowl, mix the cubes of paneer with the yogurt, tandoori masala, ginger, garlic, lemon juice and some salt. You want a bright red, strong marinade.

Now chop the peppers and onions into large, even chunks – halve and then quarter. In another bowl, mix them with the oil and some salt.

Finally thread the ingredients into bamboo skewers – pepper, onion, tandoori paneer, pepper, onion and another cube of paneer. Repeat this with 10 skewers.

When the BBQ is ready, cook the skewers until the peppers and onions get charred on the outside and the paneer softens to a mozzarella -like texture. Eat it straightaway before the paneer goes cold.

P.S. = Happy Independence Day. I tried and failed to write something less frivolous on this historic day, but others have had more success than me…

20 responses to “Strange summer and shashliks”