As beach season draws frighteningly close, hubby and I are watching what we eat like hawks. My student sister is providing some inspiration with her GM diet, aimed to knock off the pounds before big nights out.

Indian food has a bad name for greasy fatty feasts, but summer in an Indian kitchen features many cooling, lightly-cooked meals. The BBQ becomes our very own tandoor as the weather turns, with sizzling tandoori chicken, nilgiri kebabs and shashliks. Curries are cooked with a light gravy and yogurt features in many guises.

One hugely popular yogurt dish is kadhi, a Gujarati specialty, that can best be described as a soup with tempered spices. It is very easy to stomach and is best served with khichdi.

In anticipation of the hot months lying ahead, I requested Coffee for the recipe for kadhi. Both Trupti and hers, combined with some experimenting, gave me the perfect result I enjoyed in India as a child. I ate it with Coffee’s nutty khichdi, which was absolutely delicious too. 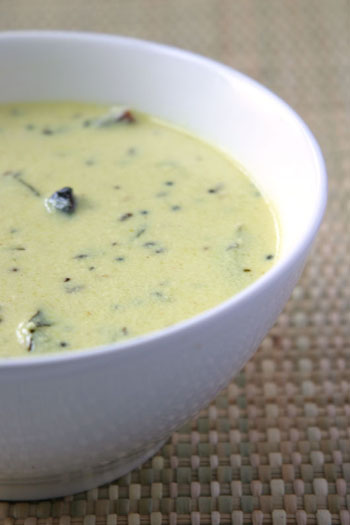 In a large bowl, mix together the yoghurt, water, gram flour, salt and sugar. Whisk it briskly until bubbles appear. This will prevent it from splitting later.

In a small pan, heat the ghee and when hot add the asafoetida. When it dissolves, add the mustard seeds and the jeera. As they start sizzling, add the curry leaves, turmeric, ginger and chillies. The curry leaves change colour to a darker green and when they do, take the tempering off the heat and mix it well into the yogurt.

You can leave this mixture until you are ready to eat. Then heat the yogurt through gently on a low simmer until the raw taste of the gram flour disappears. Be sure to keep stirring so that the curd does not split.

The consistency should be light and runny and the kadhi should be sweet, sour and delicious! 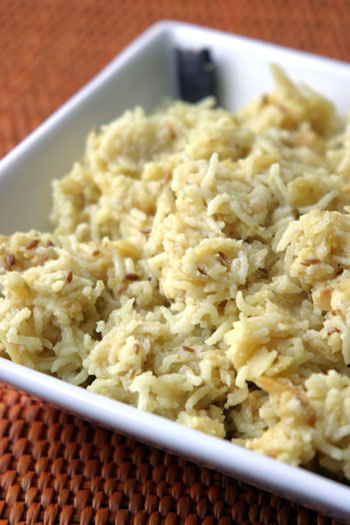 Pound the chopped garlic, ginger, chillies and peanuts coarsely. I blitzed them in a blender but you could use a pestle and mortar or simply a plastic bag and rolling pin.

Heat the oil and fry the whole spices (cumin, cloves and cinnamon) until sizzling and then the peanut mixture for five minutes. Add the rice and the lentils, turmeric and garam masala and coat it well in the masalas.

Add the hot water, bring to boil and then simmer, covered, until the rice and lentils are cooked. Alternatively, you could pressure cook the whole thing (10 minutes after the first whistle).