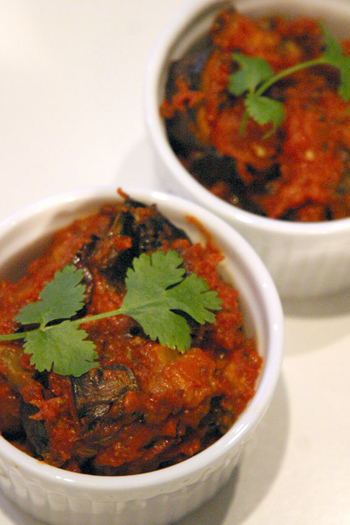 I just booked a long weekend with three girlfriends in Cannes during the film festival. Visions of chi chi lunches by the French Riviera, glamorous people and girlie chit chat flashed across the Easyjet screen. And then I saw an ugly one involving me a bikini.

I have two weeks to implement a strict new eating regime to be anywhere near bikini fit for Cannes. This is going to be tricky given my love of Indian food, chips and alcohol.

Chips and alcohol are still easy to deal with. But Indian food? Herewith starts the quest for simple Indian dishes with minimal fat.

I came up with a low fat twist on an age old classic – a Maddhur Jaffrey recipe. No offence to the doyenne of Indian cooking obviously.

My friend mentioned this recipe years ago and it seems to be quite popular. But the frying of aubergines and potatoes required before making the dish always put me off it: both the extra time involved and the shedloads of oil!!

So I came up with a cunning plan. What if I baked the whole darn thing? That seriously reduces the amount of oil and general hassle involved.

As with most things I cook (apart from the hideously lengthy feast of dhansak) I kept ingredients to a minimum. Achari means “in pickled style” so spicy, tangy and with pickle spices.

The experiment worked. The results were delicious and very healthy compared to the average Indian vegetable dish. Let’s see if this healthy resolve lasts for another two weeks.

This recipe serves two when eaten with another dish or just one with some rotis:

In a large mixing bowl, mix the aubergines with chilli powder, some salt, the turmeric, chilli and a teaspoon of oil. In an oven proof dish, pour in the oil. Carefully place the whole spices on the oil and bake in the over for 5 minutes until they roast and give off their lovely aromas.

Now tip the aubergine mixture into the over proof dish, empty the tin of chopped tomatoes into it and mix well adding salt if needed.

Bake in the centre of the oven for half an hour until the abergines are cokked but still intact. Sprinkle with the amchoor and serve with bread or roti.