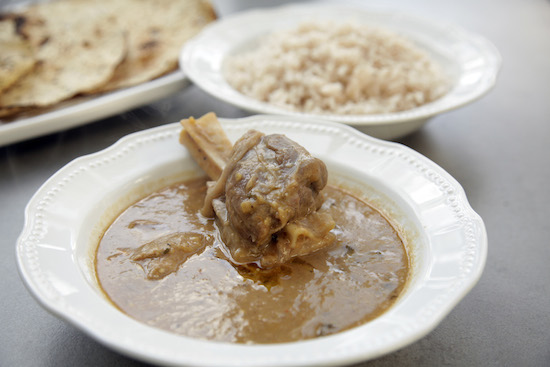 Thwarted by the early summer we are having in London, I stayed out too long and missed the only thing worth watching this week on TV.

It was an investigation into India’s rise as a superpower and economic miracle on the one hand, while being mired in poverty on the other.

It was aired on the same day The Sunday Times reported Calcutta-born Lakshmi Mittal as the fastest growing fortune in Britain with an average annual growth rate of £621million. And the day other media reported that ethnic minorities are twice as likely to live in poverty than white Britons, with some 30% of Indians in Britain living below the poverty line.

Britain’s interest in India doesn’t end in questionable economic miracles and Z-list Bollywood stars, we have the many curry houses to think about too. It’s been a while since I had a rant about the sludge passed off as Indian food in this country.

Parsi Lamb Dhansak is a case in point. It’s a flavourful, healthy and delicious curry contributed to our cuisine by Parsis, which British curry houses have bastardised beyond belief with the addition of pineapple, spinach and other dubious ingredients.

Normally, a dhansak is a weekend project with a long list of ingredients. But a pressure cooker or slow cooker, and a store bought pack of Dhansak Masala can come in handy. It also has much merit as a hearty weekday meal with vegetarian potential.

There are lot of recipes for dhansak, but there are few main things to remember:

My suggestion would be to cook this as a one-pot stew and eat it with Parsi Brown Rice. Oh and don’t get put off by the long list of ingredients – think how much fun it’ll be telling your local curry house where to dump their dhansak.

Wash the lentils with cold water until the water runs clear. Leave to soak covered with fresh water.

In a frying pan, dry roast the spices on a medium heat for 20 seconds. Then grind into a paste with the ginger and garlic using a tablespoon or two of water. Coat the meat pieces in this marinade and leave to sit.

Next, bring the oil to heat on high and when it’s hot and sizzles when touched with a wooden spoon, saute the chopped onions. In 10 minutes, when the onion is golden, drop in the lamb along with its marinade and saute for another 10 minutes until brown all over.

Now mix in the tomatoes, and as they melt away, spoon in the lentils and the other ingredients for the lentil mixture. Pour water in to cover, bring to the boil and cook on a gentle medium heat for another hour to hour and a half until the lamb is literally falling off the bone. You could use a pressure cooker or a slow cooker to do this for you.

Go into the pot and mash the lentils up so you get a smooth mixture towards the end of cooking time.

Finish by stirring the tamarind paste, check for salt and add more if you prefer. Serve Parsi Lamb Dhansak hot with ghee dropped on top.