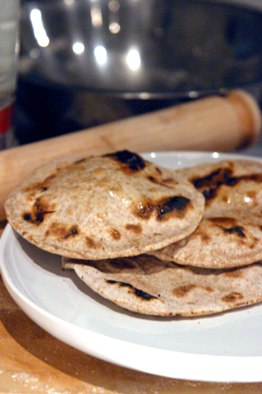 The day started with a very English breakfast meeting at 8:00am followed by shockingly hard work on three-inch red stilettos. But I just couldn’t stop thinking about soft, fluffy rotis/chappatis.

Back home and two double vodka cranberries later, I decided to have a second go. The background research was in place.

Following my failed attempt over the weekend, I asked my mother what could have possibly gone wrong. She said: “It’s all in the kneading.” Read: “I don’t have a clue either.”

I took the wise advice of friends, blogger buddies and internet research instead. Calm and in control as you can only be after two stiff drinks, I took to roti making with renewed gusto.

The results were not bad at all. The were soft and fluffy, almost round and two out of three filled up with air. That’s near-perfect in my books. 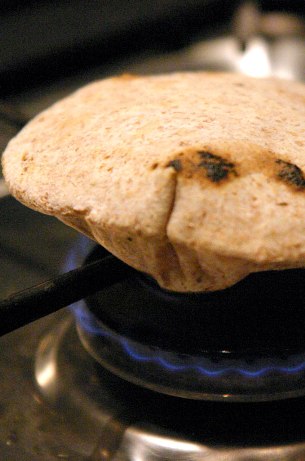 So here is the way to make three rotis after a hard days work for beginners like me.

Line the work surface with newspaper in case of spillages. In a large mixing bowl add the flour and the salt.

Add a little bit of hot water and mix it into the flour vigorously. You will get a crumbly mixture. Then add a bit more and repeat the process. The idea is to break the flour down and incorporate plenty of air into the dough.

Keep adding water until you get a hard dough that does not stick to your fingers. You won’t need all the hot water in the cup.

Now go into the dough with your knuckles, kneading viciously. I did this about 6 times and got bored, but the more you do this the softer the rotis will be.

Roll the dough into a thick sausage and break it off into three parts. Make dough balls, store in the mixing bowl, cover it with a damp cloth or kitchen towels and leave to rest for 15-30 minutes.

After the resting time, lightly flour a flat chopping board and heat a frying pan or flat griddle pan. Dip the first dough ball in the flour lightly, flatten and roll it out about 1 mm thick in a round shape.

If you don’t get a perfect round, just use your fingers to stretch the roti out in the wonky directions.

Now place the roti on the frying pan and heat until little bubbles appear on either side. You may need to press its surface with a slotted spatula or flat turner to encourage this.

When the bubbles appear, take the frying pan off the flame and toast the roti on the naked flame for a couple of seconds on either side, until it swells up. Don’t worry if it burns a little bit, this just adds to the smokey flavour. Use a tong to flip it over.

When the pale brown spots on the roti turn darker and it swells up, its done. Remove from the flame and start the process all over again with the second and third dough ball.

Serve the rotis hot, lightly buttered on one side. Finally, crumple all the old newspaper and throw it out to get a flour-free, shining kitchen surface.