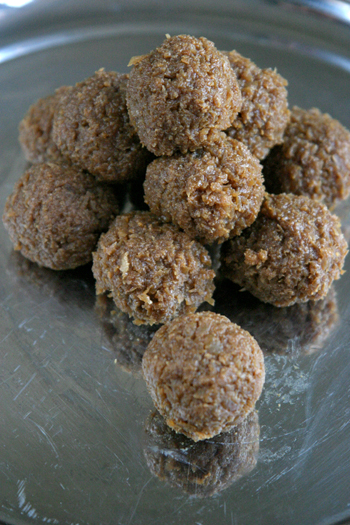 The Friday 13th dinner party went off without a hitch. I stayed sober throughout and the food got polished before I could say “have a second helping”. It was a great way to usher in the Bengali New Year. I really should have done some more of the good Bengali stuff.

But instead I ushered in the New Year dancing in skinny jeans until the wee hours of the morning with a bevvy of beautiful girls including two other mad Bengalis and a Russian.

To make amends, I decided to cook some delicious Bengali sweets I ate at home – Narkel Naru or coconut sweets. Traditionally, these are made with jaggery, but I used dark muscavado sugar instead which has a similar rich, dark loveliness. I also used half a fresh coconut I cracked on my tiny balcony.

I’d never bothered making these before so it was all down to trial and error.

And Sweet Jesus, error it was… this recipe turned out to be the anti Christ of Quick Indian Cooking. A full hour and a half to make them, plus cooling time – The sort of thing that normally leaves me quaking in my boots.

Anyway, as it is Bengali New Year and therefore a special occasion, I am breaking the first rule of my blog and posting something that took pointlessly long to make.

Next time, I’ll use my brains and a 200ml tin of evaporated milk instead. Here is the recipe to make about 12 little golden balls of coconut deliciousness.

Bring the milk to a boil and then lower the heat to a high simmer and reduce, stirring regularly.

Scrape the coconut out of its shell using a butter knife, peel the dark skin off the back and blitz it in a food processor.

When the milk reduces to about half its original level and thickens, mix in the sugar and the coconut. Continue to cook it on a low flame until all the liquid evaporates and you get a sticky, thick mixture.

Form little balls with the mixture and cool before you eat.