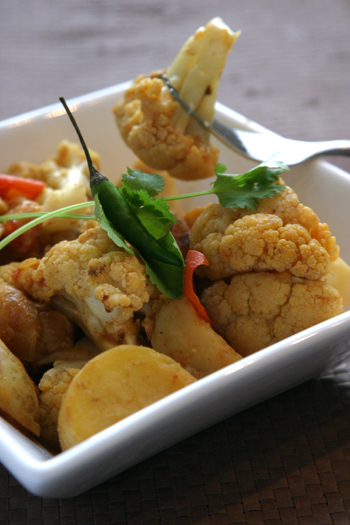 It’s official. The Bollywood film my sister is acting in has been named. It’s called Love Songs and it will also feature industry stalwarts like Jaya Bachhan and Om Puri. Sis has been busy perfecting her dance moves on the streets of Calcutta, in full costume, the entire weekend.

All this while her oldest sister, i.e. moi, has been donning spring colours, sampling flavoured vodkas and singing “like a virgin” in karaoke bars. Even the new bottom skimming dress got a great response. Until someone said: “I love your top!”

What a role model! My little sister, I mean.

To follow on from my previous post on two ways to cook potato and cauliflower curry. We’ve covered aloo gobi, the popular Punjabi version. Here is the Bengali version, which is eaten as a light curry with rice.

Heat the oil and fry the bay leaf, until it starts sizzling. Then fry the onions until translucent.

Throw in the potatoes, all the powders apart from the garam masala, add half a cup of water, cover the pot and cook the potatoes.

When the potatoes are almost cooked (you will be able to insert a fork into the potatoes with some difficulty), add in the cauliflower and the tomatoes.

Cover the pot and cook until the cauliflowers become soft and a fork can be inserted into them easily.

It’s very important to add the cauliflower when the potatoes are almost cooked or they’ll be overcooked.

Add salt and sprinkle garam masala and fresh coriander to finish. This dish should be served with a light curry base, ideally with some rice.