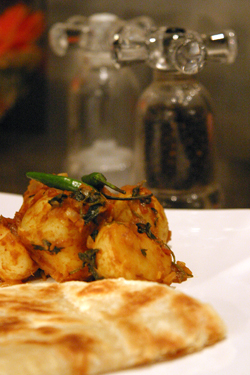 Sense and sensibility were not the key focus of this week. My nutritionist has forbidden sugar consumption. So I loaded myself until 3:00am with alcohol and msg instead. In Soho. While jet lagged.

I sobered up quickly when I read about fellow UK blogger who recently bagged a 70,000 pounds sterling publishing deal for a book.

I read it. And it’s compulsive stuff. This poor pregnant woman is stuck in the North of England, with nothing but sheep, daffodils, lunatic neighbours and a child for company. She may as well be in the Sahara desert living with cactii.

To think I’ve been moaning about the London Underground!

If I were to suffer the same fate, I’d cook and eat so much Indian food I’d become a pig and turn myself into the local butcher.

Back on the subject of food (I always find a way), this week I’ve been trialling recipes from published chefs and food writers. It’s a bit like this other blogger, who got sick of stocking cookbooks and started using them instead.

My first recipe is from the fantastic Bollywood Cookbook by Bulbul Mankani. Only die-hard Bollywood fans or lonely ladies need bother, but surprisingly the book has lovely recipes and some super simple ones.

I picked a favourite recipe from the Bachchan family, without a doubt India’s most powerful Bollywood clan. It’s for Aachari Aloo or pickled potatoes.

This recipe is so simple and its ingredients can be found widely. Even in Northumberland!

The recipe serves four, when cooked with another dish or two when eaten on it’s own:

Drop the tomato into hot water, peel and chop. Heat the oil and fry the onions until golden brown.

Add the turmeric powder and the chopped tomatoes and fry, using hot water until the tomatoes dissolve and turn into a paste with the onions.

Chuck in the potatoes, add half a cup of hot water, and boil gently until they are cooked.

When they are soft, mix in the mango pickle gravy and coriander leaves.

Finally add salt to taste and serve hot. I chose parathas to eat this with.

15 responses to “Boredom and Bollywood cooking”