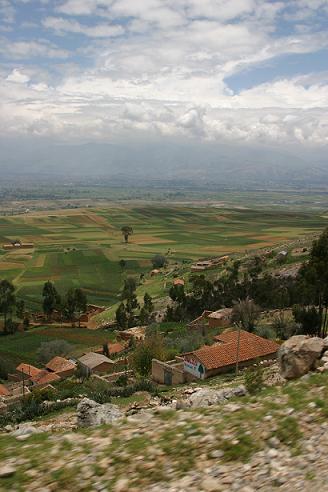 I can´t believe my holiday is almost coming to an end. I´ve been at my in-laws´place in Huancayo, a town nestling in the Mantaro valley of the Andes (pictured) for the best part of two weeks. And spreading the word here about real Indian cooking has been easier than I thought.

For a start, Bollywood is as popular here as eating guinea pigs, drinking pina coladas and colourful fiestas. Secondly, my in-laws run a children´s charity which not only educates, clothes and cares for disadvantaged young children but also operates a vocational traning centre teaching them basic skills like cooking, dressmaking and carpentry. 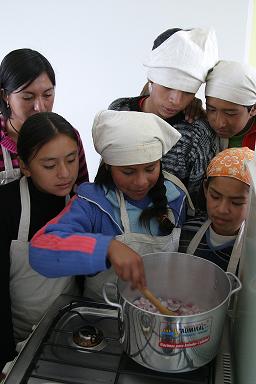 Isai, the chef and professor of the cooking class let me take a morning session on Indian food. Hubby agreed to translate and take pictures. And voila, an Indo-Andes cooking class was born. 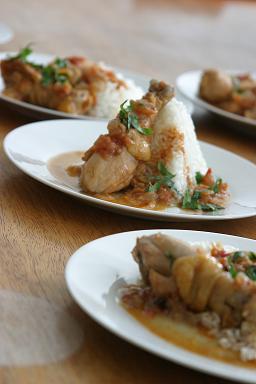 We made Tomato Chicken, a slightly dry and sweet dish that´s best eaten with rotis. We bought all the plates so the children could sample the food (with rice) instead of seeing it sold to other hungry bods. The class was a resounding success even though I firmly refused to do any Bollywood singing, dancing or performing.

Interestingly, they don´t use cloves and cinnamon in savoury cooking in Peru. My little students were ace at chopping, stirring and eating the food.

In the meantime, chop the ginger and garlic finely. We used a grater for speed.

When the onions are brown add the garlic and ginger and fry for a while until they start going brown too. Now add the turmeric and chilli powder, frying the mixture until the powders lose their pungent smell.

If at any time the mixture starts sticking to the bottom of the pan, add a little water and stir.

Then add the tomatoes and fry on a high heat until they disintegrate. Add a cup of hot water, lower the flame and let the mixture simmer.

Slowly, holes will form in the mixture and it will start oozing oil. When most of the water has evaporated, add the chicken pieces, raise the flame to highÂ and stir them into the masalas.

Add another cup of water, cover and simmer until the chicken is cooked. This dish should be dry and slightly sweet. It is best eaten with bread.