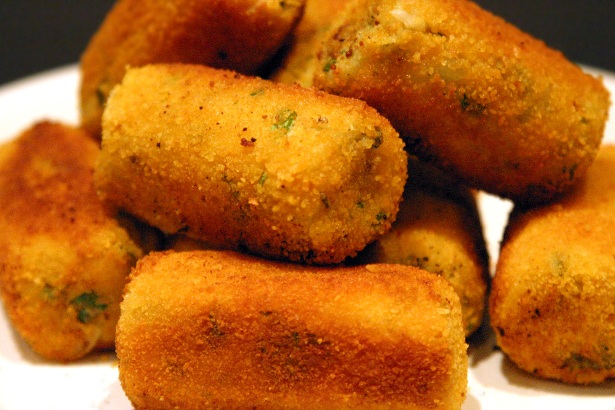 Fagged out from the excitement of a friend’s wedding, I could barely lift myself off the couch on Sunday. Forget about bring myself to cook anything. But my Sunday tradition of cooking an Indian meal must be upheld at any cost. Besides, if this whole sloshed on Saturday, recovering on Sunday thing continues unchecked, I’ll have no Indian food for weeks.

I took an easy option.

Years ago my father gave me a brilliant cookbook by Sanjeev Kapoor, India’s first and foremost celebrity TV chef. I found the recipe in it for traditional Bengali fish cakes called Macher Chop. The chops are super easy to make and totally addictive. I try not to cook them for guests to keep it less fiddly, but on a quiet Sunday night in front of the TV, these are just what the doctor ordered.

3 green finger chillies (more if you can handle them)

Salt and pepper to taste

Use your hands to mash the potatoes and fish, mixing the lovely masala mixture in. Taste to make sure there’s enough salt.

When the mixture looks evenly distributed, fashion it into croquettes about 2 inches long and 1 inch thick, dip in the egg and roll in breadcrumbs.

Heat the oil and shallow fry the little pieces of loveliness until they are golden brown all around.

Enjoy with salad and a selection of sauces – ketchup, tabasco and sweet chilli.